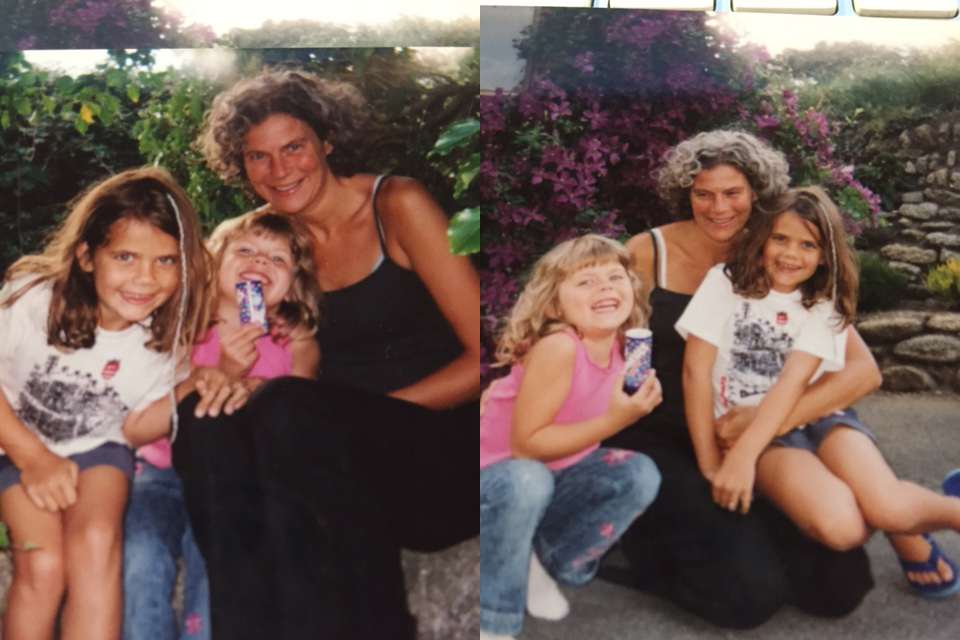 I’m at a crossroads, a turning point. It’s a milestone moment for me and, to be honest, I’m considering a breakdown or, as Brené Brown says: “It’s not a breakdown, it’s a f*****g spiritual awakening.”

It was a no brainer of a decision to be honest. Historical factors played a part, as did having the best role model for a Mum anyone could have in my older sister. Being the best Mum I could possibly be was something I was driven to do – wanted and needed to do.

This brings me to my girls, Cora and Emmy, and their journey. They were born two years apart at the Prince of Wales hospital in the New Territories, Hong Kong but it wasn’t long before we headed to the open spaces, clean air, fields and beaches in Cornwall back in the UK where they had, what can only be described as, an idyllic childhood.

Days were filled with fresh air, the outdoors, play, laughter, books at bed time, cooking with playdoh, hot chocolates by the aga, keeping chickens and growing our own veg, days on the beach and hours with the dressing up box, parties and sleep overs, and crafts on wintery afternoons in front of the fire.

As a parent, you never truly know if you’re doing a good job. That’s why one of the loveliest compliments I’ve had on being a Mum is when, a couple of years ago, Cora said she wanted her kids to have exactly the same childhood as she had had.

It’s now 18 years and too many moves later. The girls are now 18 and 20. It’s this that brings me to my crossroads. And it’s because being a Mum has defined me for the last 20 years (I’ve never done balance very well), that I’m considering my breakdown (or spiritual awakening!).

But before I go into that, let me tell you about the girls. Remaining as objective as I can, they are amazing young women. They have a strong moral compass which was instilled from an early age. ‘Please’ and ‘thank you’ were important as was being told ‘no’. Kindness was hugely important. I wanted the girls to be really, really close and to have their own relationship with each other outside of me or anyone else. From arriving in Cornwall – I orchestrated that – time together when I ‘disappeared’. They have an incredible relationship and that makes me enormously happy.

They are truly settled in Australia and are carving out the next chapter of their life. They have great friends, lovely partners and strong relationships. They have ambitions and they have balance. They are great company. They are grounded and they don’t take themselves too seriously. They are interested, curious and have empathy. They both have a superb sense of humour.

I couldn’t honestly ask for more. Of course the s**t will hit the fan in their lives – but when it does, I know they’ll have the resources to deal with whatever is thrown their way. Or not, and they’ll ask for help.

Being a parent is such a selfless task and throwing yourself into motherhood like I’ve done makes the phrase ‘Now back to me’ seem quite strange.

I’ve never been one of those Mum’s that has hankered after times gone – or been nostalgic. I’ve never thought ‘Oh I wish they were toddlers again’. I’ve genuinely been curious about the ‘next phase’ and welcomed it and loved it. (Except for the 8 months after we moved to Perth when I was totally ineffective with Cora – who hated Australia, us and the world. I remember endless phone calls with Dinos who wisely counselled me and said I simply had to wait it out. (Of course he was right.)

I think being a critical reader has also shaped how I’ve been as a Mum – constantly stepping outside the moment and looking back in – seeing what was needed in the role – what the girls needed in me and adjusting as I went.

I had a hint of this current, challenging time when Emmy passed her driving test 12 months ago and I was no longer needed to be ‘Tennis Mum’. 5 sessions a week, hours in the car, even more hours in a cafe doing ISTA work while I waited for Emmy and the trip home. I remember feeling – crikey – what do I do with my time now? But that was nothing compared to now.

I recently had two days with the incredible Bek Smith (thank you Moira Arthurs for the connection). Bek works in lots of fields but came to work with me for two days on wholehearted living and leadership – leadership of my own life as well as leadership of ISTA.

One of the many valuable (and life saving) tasks we did was to divide my time up and plan ahead. Get off the roller coaster of work, walking the dogs, laundry, shopping, paying bills etc. So now I have a very impressive weekly chart that is divided up into chunks of time focussing on work, chores, house and garden, life admin and self-care.

And a thank you to Jeremy Otto – who gave me the term ‘life admin’. I went through a phase about 12 months ago being totally overwhelmed with all I had to do on a daily basis – let alone 8+ hours work.

Then, during one of our chats, Jeremy coined the term life-admin and it was an aha moment. Finally, I had a term to describe so much of what I had to do. So now those jobs get done in my life-admin sessions. Look, it doesn’t always go to plan and heaven forbid the death of spontaneity but, it’s helped.

What’s needed now the panic and the emotional turmoil of both girls becoming adults are subsiding (well maybe a bit – I still have my wobbly moments) is reflection time. Being kinder to myself. And beginning to think about reinvention.

I’m one of those classic women who have slightly lost the sense of who I am outside the role of Mum. I said I didn’t do balance well. That’s made this particular milestone harder than I thought, and challenging, but my northern roots tell me I need to deal with it, get over it and crack on. As Brené says we need to ‘lean in’ to the discomfort.

I’m taking a leaf out of Madeleine McKenzie’s book (Big Little Lies) in requesting girlfriend time with the girls. I’ve suggested that once a week we make time and do something together, just the three of us. I’m getting better at being in the house by myself.

I’ve started to learn how to quilt; I want to learn how to sail again (that was a huge part of my childhood); I’m going to do a PhD; I’m going to try to be less knackered on a daily basis; I’m hungry to travel again. I want to jump in a combi with Karl and explore Western Australia. I’m not beating myself up about my addiction to TV series’ on HBO or netflix.

So breakdown or spiritual awakening? I’m planning on the latter.