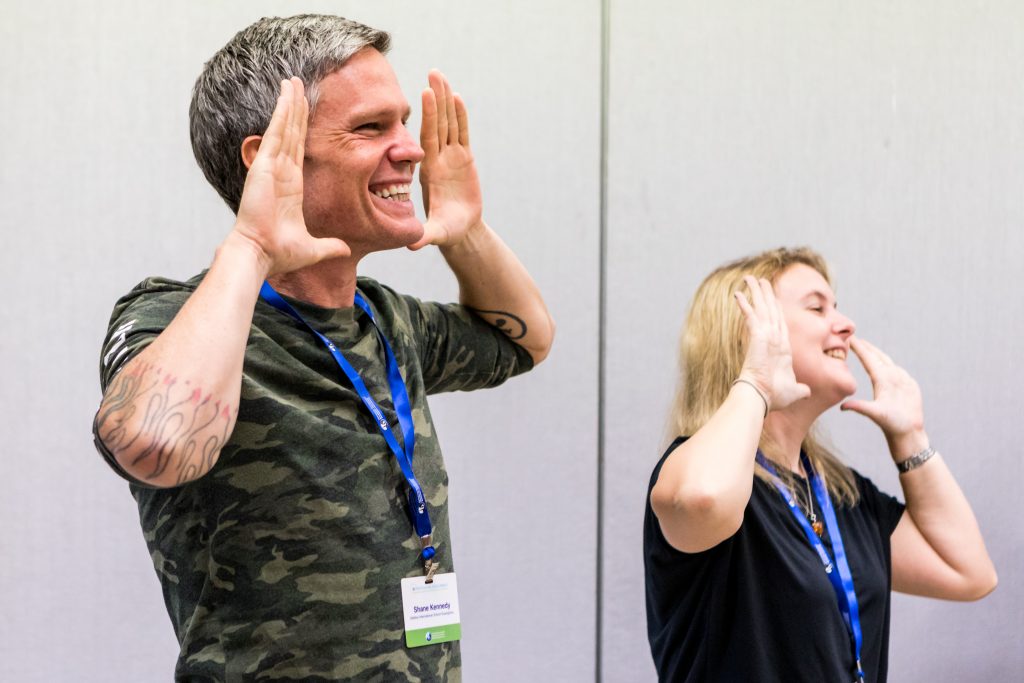 Description
Viewpoints is an improvisational performance method which evolved from post modern dance. Its founder, Mary Overlie, used the method as a structure for dance improvisations. She broke down the elements of performance into the categories of time and space. Further developed by Anne Bogart and the SITI Company, Viewpoints is used to build a strong ensemble and create dynamic stage moments. This Viewpoints one day professional development workshop will encourage performers to investigate the elements of time and space to make bold and considered theatrical choices. Participants will develop a strong understanding of their physical language in relationship to their fellow performers, the performance space and the audience and discover how meaning can be interpreted through movement and the placement of the actor’s body in space.

Learning outcomes
1. Understand and facilitate select improvised movement and devised exercises based on Viewpoints.
2. Use Viewpoints as a framework to analyse live performance.
3. Encourage bolder use of the elements of time and space in performance, using the language of Viewpoints.

About your workshop leader
Shane Anthony is an experienced theatre practitioner with extensive directing, movement and teaching experience specialising in actor training with a physical focus.

Shane has worked as a director, acting and movement coach for the past 18 years. He is a graduate of the Directing Program at the National Institute of Dramatic Art, Screenwriting for Feature Film at the Australian Film, Television and Radio School and has also completed a BA in Theatre Studies at Queensland University of Technology (QUT). In 2007 he travelled to New York to continue training with Anne Bogart and the Saratoga International Theatre Institute in Viewpoints and the Suzuki Method of Actor Training and in 2012 he received a Mike Walsh Fellowship to attend the New York Film Academy.

Recent directing credits include Anatomy of a Suicide by Alice Birch and The Whale by Samuel D.Hunter at The Old Fitz Theatre (nominated for eight Sydney Theatre Awards in 2016), Lighten Up by Nicholas Brown and Sam McCool at Griffin Theatre, Songs for the Fallen for the New York Musical Theatre Festival (winner of Best Musical and Most Outstanding Actress), Sydney Festival, Arts Centre Melbourne and Brisbane International Arts Festival, Altar Boyz, Calendar Girls and Avenue Q for Fortune Theatre (New Zealand), My Name is Rachel Corrie for La Boite Theatre, 3 Winters by Tena Štivičić, Love and Information by Caryl Churchill, Orestes, Trojan Women and Radio Hysteria for NIDA Open, Doctor Faustus and The Crucible for RCHK (Hong Kong), Mrs Bang: A Series of Seductions for the 32nd Stage Song Festival (Poland), Often I Find That I Am Naked for Critical Stages – (Australian National Tour), Motortown by Simon Stephens for 23rd Productions (nominated Best Show, Matilda Awards). He is currently in development on the new verbatim work The Untouched Remains, focusing on hate crimes in Australia.

Movement direction includes The Curious Incident of the Dog in the Nighttime for The Court Theatre in Christchurch, the Australian feature film, Sleeping Beauty, and in 2009 worked as show director for CIRCA on their European tour of CIRCA.

Session #2
Viewpoints in practice: training the elements of space.

For participants
Registration is now open.
Regitration closes 21st November 2019.
Places are limited, so please register early.
Participants should plan to attend the workshop in its entirety.
If travelling from outside the host city, please organise travel and accommodation accordingly.

Please note
Registration fees include lunch and tea/coffee breaks.
Any bookings or amendments taken in the six weeks prior to the event will incur an additional GBP £50 late booking/amendment surcharge, subject to availability.

For artists
Your EC will be in touch about travel details.
Please ensure you have the correct visa to enter Hong Kong.

For artists
ISTA will book accommodation for artists for the required number of nights.

For participants
Lunch will be provided on the day of the workshop; along with coffee/tea breaks throughout the day.
Breakfast and dinner are not provided.

For artists
ISTA will cover all meals for the duration of the workshop.