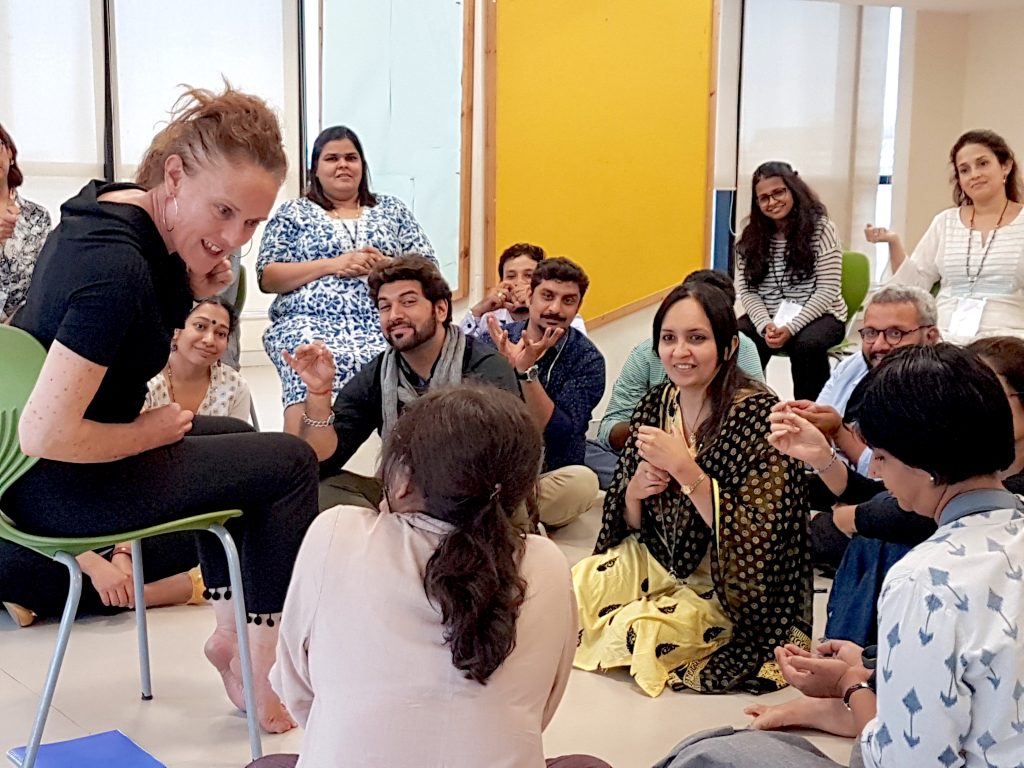 This event takes place at 12:00-1:30pm [UK time].
While scheduled, primarily, as an evening workshop for teachers working in Asia, Theatre teachers globally are invited to attend.

Title
Navigating your journey through the world of theatre traditions – blended approaches to the DP Theatre research presentation assessment task.

Workshop description
This workshop will explore how to practically and physically research an unfamiliar theatre tradition remotely. The focus will be in the process of learning conventions of Kathakali and will include top tips on documenting processes and filming the research presentation.

Learning outcomes
Participants will explore:
• Effective ways to carry out research remotely.
• The process of practically exploring a convention from a theatre tradition.
• Ways to document processes of exploration and application.
• Approaches to filming the research presentation.
Top tips to give students when approaching the RP task.

How this workshop will benefit teachers in their curriculum delivery.
This workshop will give teachers an insight on how to teach world theatre traditions as part of their core DP Theatre curriculum and prepare students for the assessment task of the research presentation. During the workshop teachers will get hands on experience of how to approach research, learning, documenting and reflecting on learning the unfamiliar. The world theatre tradition that will be explored in this workshop is Kathakali dance theatre from southern India.

I have worked for ISTA since 1999, was on the board of trustees for six years and am now an Honorary Life Member. Since 1999 I have hosted festivals on four continents (introducing ISTA to South America) and taken on the roles of creative director, Rep, teacher workshop leader, student ensemble leader for TaPS and artist in residence. I am principal examiner for the research presentation, Diploma theatre teacher trainer for the IB and a Kathakali workshop leader and performer.
I have been learning Kathakali since 2004. I started my training with Mr Keshevan Kalamandalam in Kerala, where I learnt the mudras, navarasas and basic kalsadhakam of talas and kalashams. I continued training at the Kerala Kathakali Centre, Cochin, under the guidance of Vijayan Warrier Sadanam, where I still train. My first performance, as Krishna, was in 2015 at Gopalakrishna temple, Kerala. Between 2017-19 I performed as Kichaka, from the Mahabharata, in performance presentations in China, Atlanta and Australia. In 2019 I trained to perform the role of Panchali and performed in the Kerala kathakali centre and in other parts of Kerala.
I have run training and master classes for teachers and students in Australasia, North America, Europe and Asia.

The workshop will take place using the platform Zoom.
Places are limited to 20 participants per workshop.

If possible, please try to have a small amount of space near to you for any practical work.