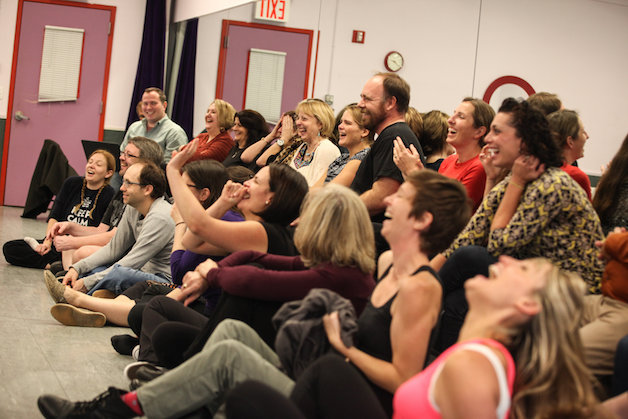 PLEASE NOTE CAT 1 IS NOW FULL. PLEASE CONTACT IAN TO GO ON THE WAIT LIST OR FOR INFORMATION ABOUT FUTURE WORKSHOP POSSIBILITIES.

Teachers attending will have one 90-minute master class from a range of traditions including Butoh, Bunraku and Musical Theatre.

All participants will attend two professional theatre performances.
The Play That Goes Wrong at the Lyceum Theatre. Winner of the Olivier Award for BEST NEW COMEDY, The Play That Goes Wrong is a classic murder mystery chock-full of mishaps and more madcap mania than a Monty Python marathon! Welcome to opening night of The Murder at Haversham Manor where things are quickly going from bad to utterly disastrous. With an unconscious leading lady, a corpse that can’t play dead, and actors who trip over everything (including their lines), it’s bedlam beyond Broadway’s wildest nightmare and “A RIOTOUS EXPLOSION OF COMEDY!” (The Daily Beast)

Vangeline Theatre presents: Butoh Beethoven: Eclipse with Vangeline at the Theatre for the New City, (Johnson Theatre). A 60-minute Butoh solo conceived, choreographed and performed by New York Butoh star Vangeline, conjuring the ghosts of two passionate giants — Tatsumi Hijikata, founder of Butoh, and composer Ludwig van Beethoven in this hypnotic, electrifying and award-winning solo performance. Butoh Beethoven: Eclipse (Admiring Tatsumi Hijikata), is a solo piece that illuminates the darkness of Butoh with the addition of cutting edge lighting technologies such as the futuristic creations of European designer Tilen Sepič and fiber optic costume by the French company Lumigram. After touring this show for the past two years and receiving four stars at the Edinburgh Fringe Festival, five stars at Copenhagen Stage Festival and critical acclaim in New York and the United States, Vangeline shines a new light on Butoh and will transport audiences.

Travel form from artists due by Friday 15th September 2017.
A full information pack will be sent to all participants three weeks prior to the workshop.

Participants are advised to arrive into New York by evening on Wednesday 11th October 2017 and should not plan to leave New York until after the last session finishes at 3:00pm on Saturday.
Teachers arriving late or leaving early will only receive a certificate of partial completion.
Please arrange travel accordingly.
All participants should fly into New York City airports: JFK, LGA and EWR
Please note it is the responsibility of teachers and ISTA artists to ensure they have arranged their own visas, as required.

All participants are responsible for booking their own hotel accommodation in New York. You might want to choose a location close to Ripley Grier Studios for easy access to the workshop venue.
ISTA will be organising accommodation for the ISTA artists for the 11th, 12th and 13th October 2017.

Coffee/tea breaks and lunches are provided as part of your registration fees.
Breakfasts and dinners will not be provided at this event.