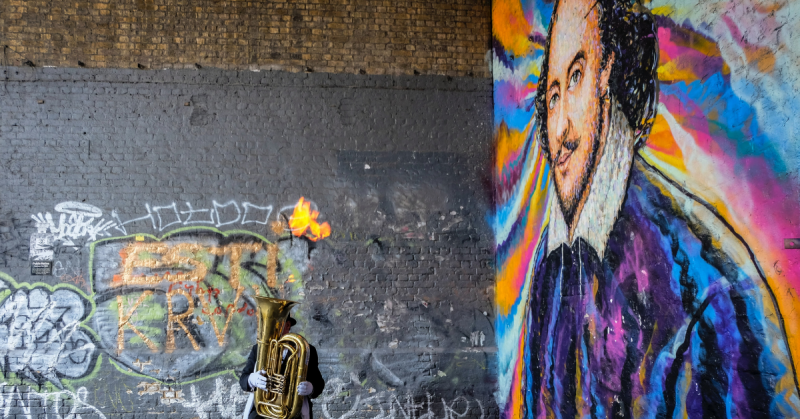 If you struggle with Shakespeare, you are not alone. In fact I would go as far as saying that everyone has been through their own love/hate struggle with the Bard. If anyone claims to just “get it” straight away, trust me, they’re probably lying. They may be further along the road than you, closer to “Shakespeare genius” than “Huh?” but they all started at the beginning. I’ve always loved Shakespeare – watching it, studying it, directing it – but there’s a lot I don’t understand on first (second or even third) reading. I think I’m probably somewhere between “Right, I get it” and “I have to read that whole page again as I got so confused I gave up trying”. It might not be to everyone’s taste but one thing I am sure about: if you give Shakespeare a chance a world of language, poetry, humour, beauty and magic will be opened up to you.

So, here are a few things to bear in mind when you – or your students – are starting a new text. I hope they will help you along the way:

It can be far too daunting to sit down and start reading a lengthy text cold. Even the character list at the beginning can be confusing. So instead of feeling intimidated by the task ahead, put the play down and read a simple synopsis, one that covers the important plot points is a good place to start. This will help you get an overview so you know the rough content and direction of what you’re about to read. Following this, as you work your way through the actual text, it can be helpful to read a more detailed scene-by-scene breakdown. This way the play is broken down and can be much more manageable. There are many good sources to help with this: J.C. Trewin’s Pocket Companion to Shakespeare’s Plays has great summaries as does Charles Boyce’s Shakespeare A to Z which contains scene-by-scene breakdowns and commentary. There are also several excellent websites such as Shakespeare Online and SparkNotes with its No Fear Shakespeare section (be careful though, as with many things on the internet, there are several not so reliable sites).

I am not saying that reading the play “cold” is a bad idea – you might surprise yourself and understand a lot more than you’d have thought – but if you feel overwhelmed before even starting that might end up getting in the way. As soon as you’ve lost the thread of what’s going on or have to check back to the character list for the twentieth time to check whose side the Earl of Douglas is on then it’s likely to become a frustrating process.

See it in action

Don’t forget that Shakespeare’s plays were written to be watched, not read. They are scripts after-all and not books. The only people in Shakespeare’s time to have read the plays were those involved in the production and even then they would only have been given a copy of own lines. Watching a production can be the moment when many things click into place. Seeing the physical relationships between characters, the emotions involved and hearing the text delivered by those who have prepared and fully understand it will make the play much more accessible.

As with reading the text though, it will most likely be a more enjoyable experience if you have a good handle of the plot first. Be aware that many productions are edited or adapted so do a bit of research first. Read reviews and information about the company/production so you know what to expect. It’ll be a bit confusing if you turn up expecting a three hour version of Macbeth and end up with a modern dance interpretation of the themes. With this in mind it should be used as part of your study, don’t do this in place of reading the text.

If you have no access to a current theatre production there are many film and television versions available. The BBC, for example, have filmed all 37 of Shakespeare’s plays and The Globe and Royal Shakespeare Company have DVDs of many of their productions. Check out your local cinema as well – a few of the larger theatres are now live-streaming their productions so even if you can’t get to London there is still a chance to see something.

Do not expect to understand everything, no one does at first…

Even the Jacobeans wouldn’t have understood all of Shakespeare. He did after all invent hundreds of words and phrases that were completely new to people. His audience would also have been made up of both the lower and upper classes who would have had vastly different levels, if any, of education. It is very unlikely that everyone would have understood all the references to classical mythology in one scene and then biblical citations in the next. Likewise, how can you be expected to fully grasp a language that at times sounds so different from ours today with its tricky vocab (“bare bodkin”? “babukles”?? “aglet-baby”???!) and unusual sentence structures which often switch between poetry and prose. So give yourself a break. Don’t get hung up on something you don’t understand and miss the next few lines while trying to work it out – aim for the gist. Listen and concentrate but remember to sit back and enjoy it as well.

To help, get hold of a good annotated copy. Read a passage and if there are any words you do not understand, check them. I like the Arden Shakespeare editions as the word explanations are at the bottom of each page. This means you can quickly and simply glance down to remind yourself of the meaning instead of having to constantly refer to a glossary at the end of the book and/or write the meaning next to the word on the page.

Use page headings, pictures, charts and graphs for quick references. Instead of repeatedly flicking back to the character page create a family/character tree on a separate piece of paper and keep it in front of you or pin it to the wall while reading (shakespeareswords.com has great character circles that I print out). Try giving each page of your text a title, a heading that quickly describes the main action on that page e.g. “Ferdinand’s first meeting with Miranda’” or “Edmund cuts his arm”. This will make it easier for you to navigate the text when it comes to exams or rehearsals. Create as many of these simple visual references as needed. Get a piece of A3 paper and write anything that will help in bold – who’s good versus who’s bad, Caius is Kent in disguise, red rose = House of Lancaster/white rose = House of York etc.

A good way to broaden your understanding of the play is to read about it. Once you’ve got a fairly good grasp of the plot, characters and language start to have a think about such things as the themes, the historical context of the play, the politics. Don’t weigh yourself down by reading word-heavy introductions though (unless you like this kind of thing), there are so many resources that offer a wealth of information in a form that you may find more accessible. Listen to podcasts, watch interviews with directors, designers and cast members, find reviews for past productions to see how it has been interpreted, read as much as you can about the play.

A great way to see just how much you now understand is to put the book down and talk about it. Describe the plot to someone, get them to ask you questions about it. Why does that character do that? What do you like/dislike about it? Who’s your favourite character? Why? Tell them what the play is “about”, how productions have staged a gory or magical moment, whether you think Polonius is a loving father or an interfering busybody etc. By simply talking about the play with no pressure to commit your thoughts to the page you may be surprised by how much you know.

If you didn’t like the play you’ve just studied, don’t rule out the rest. The beauty of Shakespeare’s plays are that they encompass so many themes, genres and tones. Maybe the histories just aren’t for you but Titus Andronicus with its blood and gore or Much Ado About Nothing with its quick wit will suit you fine.