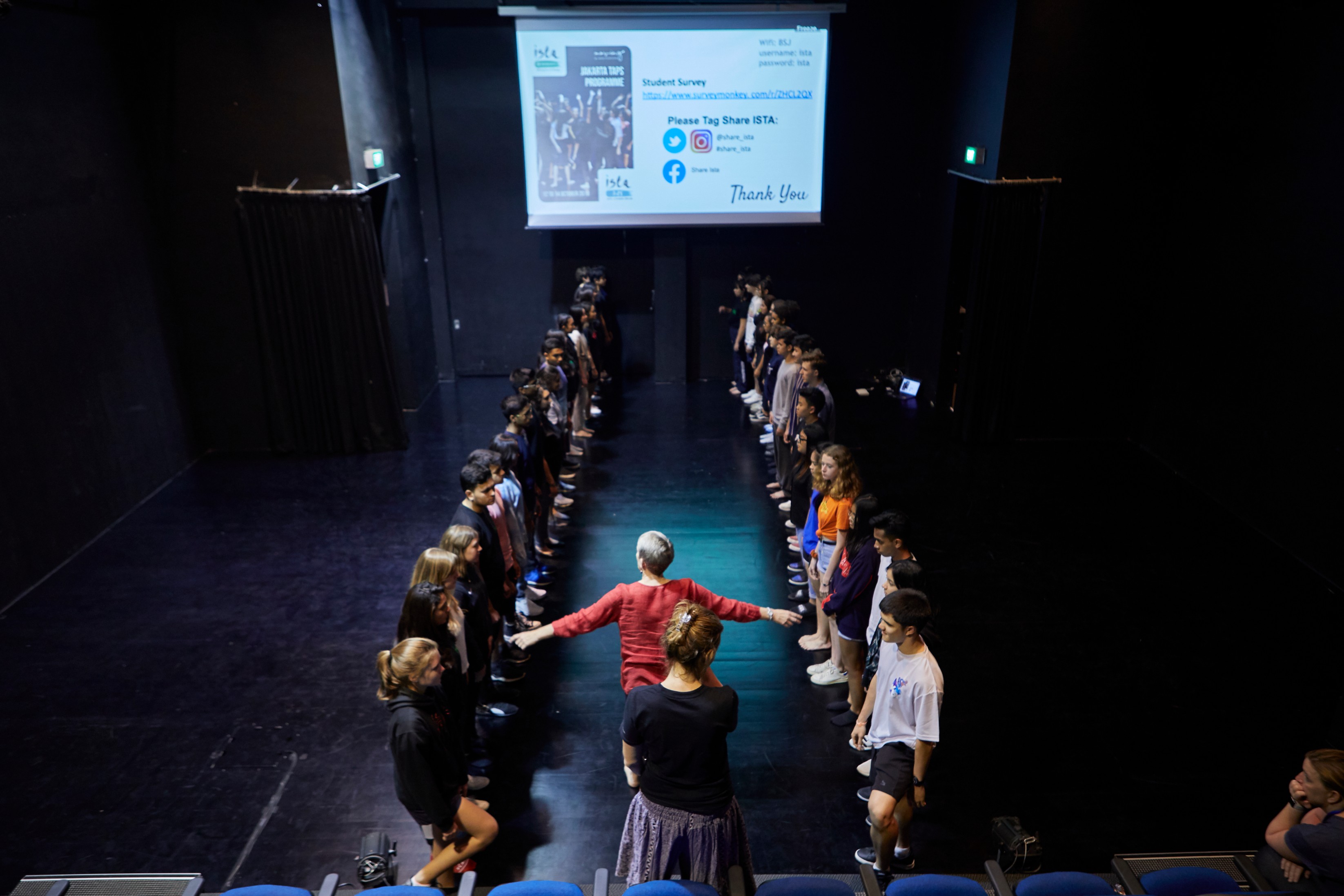 Why would I want students to practice safe theatre when the very act of making theatre is provocative?

Ms. Rathus, why not just do a crowd-pleaser?

Why are we doing a musical called Urinetown?

What does a “Brechtian” version of Oliver mean?

Why are we asking the audience to follow us around the school? Won’t they get confused? Won’t they be uncomfortable?

Why does every show that we do have to be weird?

It’s quite simple. I don’t believe in safe theatre.

What if you were forced to look through a different, unfamiliar lens? It might distort things. It might turn things upside down. A new lens might reveal information that’s uncomfortable because it’s new. But if you look through it you might find shapes and colours and ideas that went unnoticed because they didn’t complete the picture you were expecting. The thing about new lenses is that, even if they take away from conclusions that you would have previously come to, even if they make you reopen the box that you tied a ribbon around and shelved, they might finally show you a more complete picture. And, although this picture might be a bit harder on the eyes, it might give you a deeper understanding of yourself and those around you.

This action isn’t safe. Like a teenager who looks in the mirror to find new blemishes, it might cause you to feel uncertainty and doubt. It might bring up bouts of anger and tears. It’s risky. It’s unprotected.

It is the job of actors.

Actors commit to exercises in uncovering the human condition. They commit to asking questions, to looking through different lenses in order to see things from new angles. So why would I want students to practice safe theatre when the very act of making theatre is provocative?

I decided that I wanted to become an actor when I was in the seventh grade. During my middle school production that year I learned about my own desire to be loved by someone through playing a young character with the same need. When I acted my role, my heart felt as though it was going to beat out of my chest. I was used to my adrenaline rushing onstage but there were usually nerves in it. This time it was full of new, overwhelming feelings of romantic yearning and excitement – feelings that totally characterised the physical and emotional changes that I was going through as a thirteen-year-old. Releasing this adrenaline through performance gave me a new sense of freedom. I was energised by what my character taught me about myself at that moment in time.

Although this moment still resonates loudly with me I see lost opportunities when I look back on it. Many of my fellow cast members had to be experiencing the release of this hormone as they connected with characters like mine. Many of them had to have been turned on as we danced and sang our hopes and desires to each other. What if we had found a time to talk about it? What if our director had used our personalisation of our characters as an entry point to conversations about relationships and puberty? What if he had found a way to bring parents into these conversations through the context of the story that we performed? What if he had facilitated a way to share our reflections with audiences? Maybe we would have been able to add our personal stories to the stale, stock articles distributed in Health classes. Maybe we would have been able to realise that our thoughts and feelings made us similar to each other rather than different. Maybe this notion would have strengthened our student community during our teenage time of angst and alienation. And maybe our sense of community would have extended to our parents making questions about future changes a little less awkward. These maybes didn’t happen for my middle school cast. But – twenty years later – I try to make them happen for others.

When thinking about the wants of evolving pre-teenagers and teenagers, my biggest attraction to producing “provocative theatre” is its relationship to change. I choose to teach at a school that strives to provoke independent thinking because its educators understand and embrace the fact that young people have the ability to affect change. My drive to find exciting and relevant ways to explore this concept made Romeo and Juliet an obvious choice to direct. When digging into its title characters I watched my students’ emotional intelligence grow and – like “Romeo” and “Juliet” themselves – they were able to articulate their own visions of the future by considering the past. My students were shocked that “Romeo” and “Juliet” were written to be their age. They were fascinated to find that the love and wisdom of these legends seems to be so much more developed than many of the adults around them. They realised that this love and wisdom, suppressed by the story’s elders, carries undeniable weight and power. Its power brings peace to a city plagued by years of feuding between families. Its power causes a sworn Friar and a sworn caretaker to lie. Its power causes change – big, messy, meaningful change – change that gives us the impression that circumstances in Verona will be eternally improved.

Of course, making “provocative theatre” at school can be messy.

It’s hard to assure parents that a musical called Urinetown has a very real socio-economic premise. It’s hard to assure them that immersive theatre builds community by asking all involved to become a part of the action. And it’s hard to convince them that Romeo and Juliet isn’t too bloody for young audiences. But when young people compare countries that provide citizens with rights like universal health care to those that charge to use the bathroom, parents see it. When they engage their audience in storytelling and conversation during performance, parents feel it. And when they show that, although change can be bloody and terrifying, it can also provide more joy than can be described, parents get it.

There’s a saying that “the older you are the wiser you become”. But – from what I’ve witnessed – I think that the following quote by George Bernard Shaw is more accurate: “It’s all that the young can do for the old, to shock them and keep them up to date”. Although Shaw only wrote provocative theatre, his statement speaks volumes to my experience in and desire to produce it. I believe that I’m teaching the most closely connected generation. I believe that I’m teaching the generation for whom the problems are most important and the solutions are most clear. I believe that I’m teaching the generation with the ability to teach others. So I will never believe in safe theatre. I will continue to believe in theatre that shakes norms and strengthens ideals – theatre that compels young people to learn independently and together.

Allyn Rathus is the Theater teacher and Visual and Performing Arts Curriculum Leader at Whitby School. She instills leadership skills in her students through the lens of theater, paying particular attention to development of problem-solving skills, emotional intelligence, and empathy. Allyn has written about the importance of provocative theater for ISTA’s Scene Magazine, and has practiced it with students in New York City, London, and Connecticut. She spends far too much time on politics, Netflix, puppies, dreaming of new travels, and searching for the best cup of coffee around. https://www.whitbyschool.org/passionforlearning/author/allyn-rathus