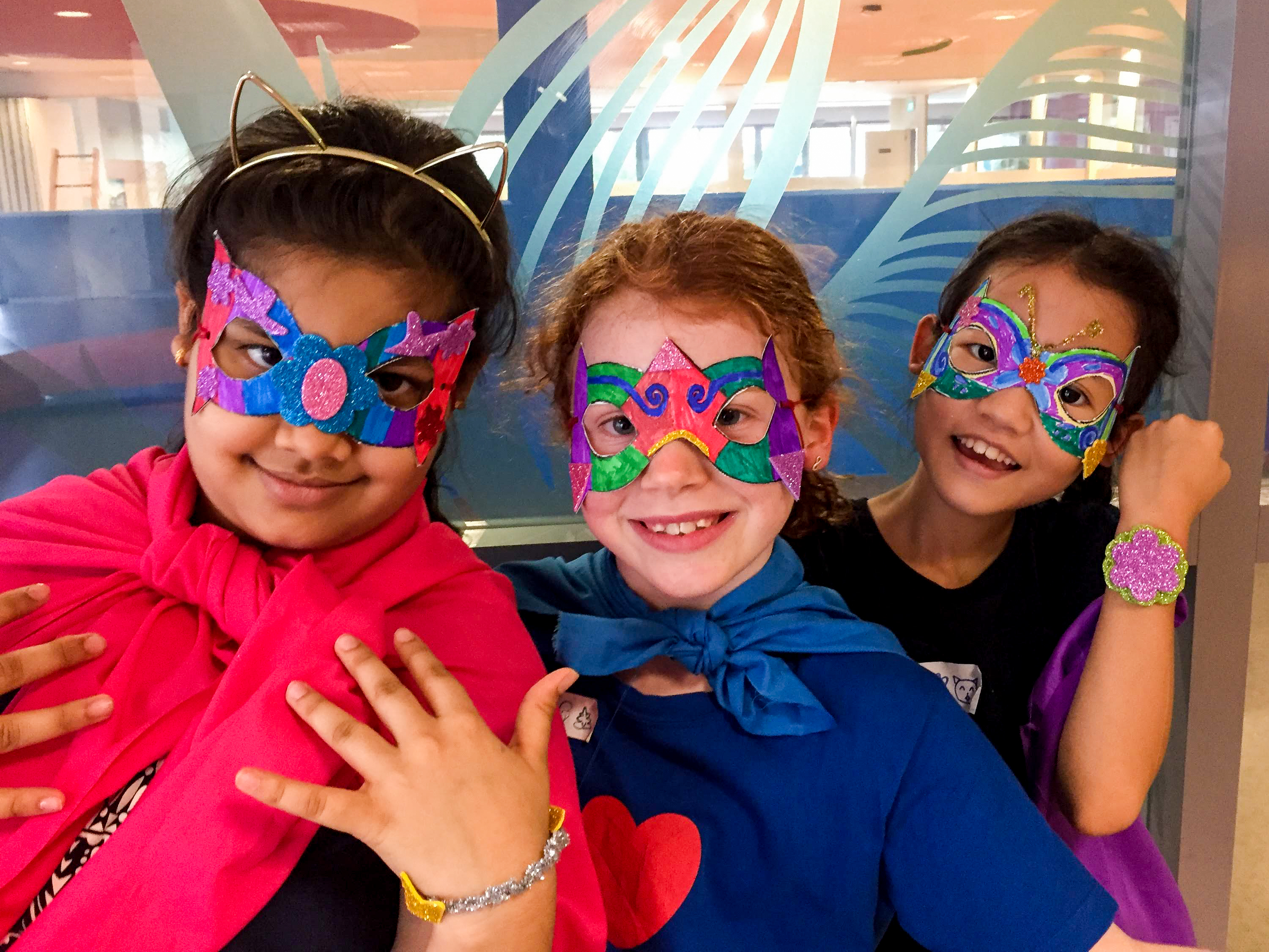 This article was originally published in the ‘Storytelling’ issue of Scene in May 2016.

Some ideas towards an idea of progression in working with stories and storytelling in drama with pre-Kindergarten and Kindergarten.

There are several viewpoints as to whether young children get more from working on what they know – dramas about going to school, shopping, their daily routines – or fantasy. It would appear to be quite clear that we need to start where children feel most at ease and then start to introduce them to stories which contain imagery and symbolism. These elements are likely to excite the children but also have a relevance to their own lives. For example, perhaps children enjoy stories about giants because that is how adults seem to them? Dealing with dragons or aliens in drama is possibly a safe way to deal with fears?

Children of three years and older have generally learned to use symbols in their play. They enjoy a dramatic play area that allows uninhibited practice of roles and activities. Typical themes include health, safety and rescue – evidence of broadening experiences and increasing awareness. Superhero themes and play that focus on good/evil and weak/strong conflicts reveal the fears and expectations that children often work out. As pretend play themes expand, offer children more control over their play. They aren’t looking to the teacher for solutions to life’s problems and challenges. Instead they need the time and support to explore complex problems, roles and relationships.

Pre-Kindergarten children enjoy their time in the classroom play corner and it is here that their imaginative dramatic stories really begin to take shape. A really useful set of ideas for dramatic play corners are provided on Kindergarten Nana’s webpage: https://dbsenk.wordpress.com/2011/03/12/dramatic-play-center-ideas/. It is within the play corner that a teacher can serve as observer and facilitator as well as participator of dramatic play with children. The teacher can constructively intervene and develop the children’s thinking by asking open-ended questions e.g. “What would you do if you were a… ?” or “What do you think will happen next?”. This encourages them to think beyond the immediate and possibly opens up the simple notion of cause and effect narrative. Being with the children in the dramatic play area also enables the teacher to show them that s/he can play a role too which in turns helps to develop a sense of trust between them. It is very important that the teacher be very careful to support children’s play and not control it. The majority of what the teacher does should centre round creating the environment for dramatic play. The children can then learn through active exploration in a warm, stimulating environment. They can grow and develop as they learn through play. Brian Woollard in The Teaching of Drama in the Primary School (Longman 1993) suggests the further stimulation of imaginative play by adding “something magic” to the play area. He suggests perhaps a key, a piece of jewellery or a costume item along with a thought-provoking question like “I wonder what door this key opens and where it leads?”. A great story starter!

A way to bridge reality and fantasy that can be used with young children might be to use traditional fairy tales. Children from around the world carry with them their own versions of the stories and these can be used to focus and involve a class, regardless of a common spoken language. The children can share a picture book or an audio-visual version of the chosen story and then can choose one of the characters to role-play in a simple retelling. Further developments in this work might be to have the children move about the space as some of the story characters, perhaps to music, and when it stops create shapes of some of the inanimate objects in the tale e.g. the cauldron in Hansel and Gretel or the beanstalk in Jack and the Beanstalk. Sometimes this can be done before the story is introduced and they can guess which one we will be working on. As they become more comfortable with this work, the three and four year olds are challenged to find alternative endings to the stories and are asked “Who had a happy ending in this story?”. And conversely “Who had a sad ending?” and “Why?”. They can be asked for suggestions as to how the ending could be changed and then after a consensus, the new ending can be effectuated. As confidence grows, the children will take on a variety of roles and be willing to try being a character not usually chosen but until that happens, the teacher must be willing to take on most of the bad character roles while the girls are all the princesses and the boys are the heroes. Though some lines from the chosen story might be the same, no two children act out the troll in The Three Billy Goats story in the same fashion. Each troll is as unique as the child acting out the character. Eventually, one or more children will volunteer to be the storyteller and replace the teacher in this. A suggested list, roughly in order, would include: The Three Bears, The Three Pigs, The Three Billy Goats Gruff, Red Riding Hood, The Gingerbread Man, The Enormous Turnip, Little Red Hen, Henny Penny, Stone Soup, The Elves and the Shoemaker, Jack and the Beanstalk, Rumplestiltskin, The Wolf and the Seven Little Kids, Snow White, Cinderella, Hansel and Gretel, Sleeping Beauty and Rapunzel.

A natural progression from working with these recognised stories, having made sure to establish that all stories have a beginning, middle and ending, would be to start devising stories together. The children could all create a character for themselves by using pieces of costume and then share their ideas about the character with the rest of the class. The teacher would then have the challenging task of incorporating all the characters into a story. As their confidence grows, the children are likely to contribute their own ideas as to the development of the story and have lots of ideas as to how their character can add to the action. Eventually, the teacher narrator will be replaced by individuals or small groups of children who will be keen to tell a story of their own.

It is at this point that moral dilemmas can be introduced and the children could take on some mantle of the expert ideas, perhaps like those described by Francis Prendeville and Nigel Toye in Drama and Traditional Story for the Early Years (Routledge 2000) in which the teacher takes on the role of “boss” of a company of Superhelpers whose job it is to solve problems posed by various traditional story characters. A few of the characters (teacher-in-role) who ask for help are:  Cinderella’s father who would like to find out why his daughter is so sad, Jill seeking help from the Superhelpers to find Jack who has disappeared after banging his head when he fell down the hill and when he is found he has lost his memory. There is also Little Miss Muffet which starts with the group seeing a poster for a lost child. The children look for her and find her hiding from the spider. She explains her fear and the Superhelpers have to decide what to do about it. No-one knows how the Superhelpers will solve the problems but everyone is deemed an expert so all ideas are shared, listened to and considered before the Superhelpers find a satisfactory ending to this particular story.

The truth is that when someone comes in and sees any of the above activities and processes going on, it is likely to appear, and probably often actually is, quite chaotic. There will invariably be a lot of movement often with music, sometimes it is very quiet and concentrated but at other times it could be frantic and even a little uncontrolled. It is pretty essential that the teacher retains the ability to bring things back but actually the freedom from a teacher-imposed structure is sometimes crucial in allowing real imaginative flow. I guess what I am saying is that the teacher should play alongside the children whilst “scaffolding” their play in useful ways and safeguarding the ideas of the quieter children and encouraging, reinforcing, questioning and developing.  But I know that what it looks like is just a grown-up playing with children. What a wonderful way to create stories.