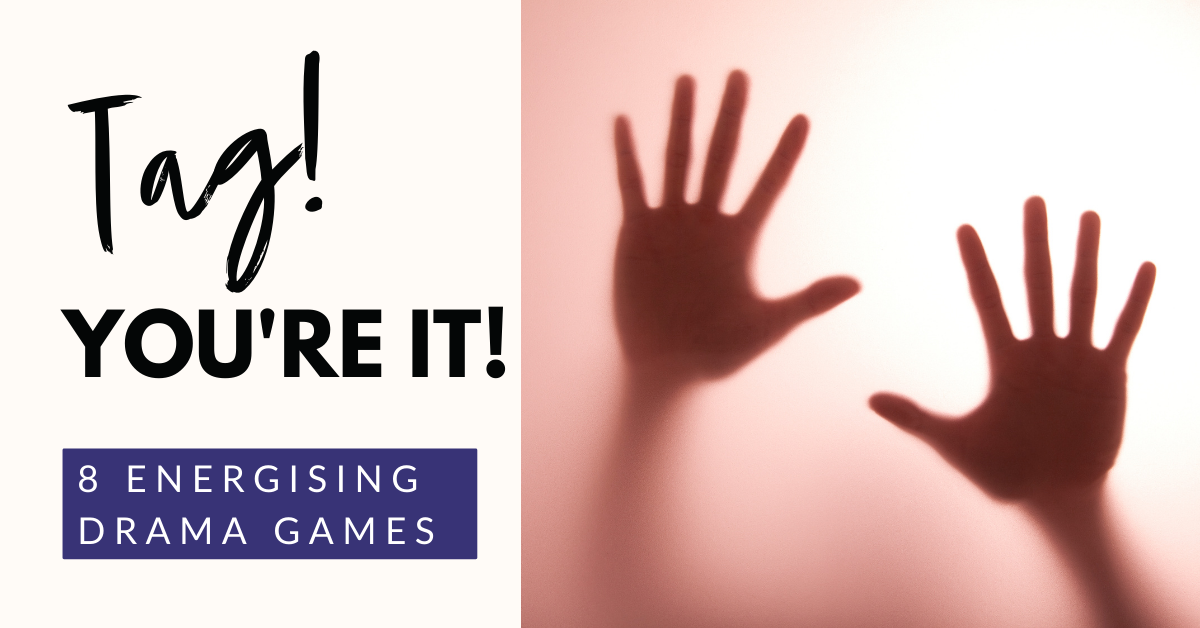 This was originally published in ‘The artist toolbox’ issue of Scene in January 2015.

Need that extra burst of energy? Try out these 8 fun tag game exercises to energise any group and get them moving.

So good! If you get tagged, you must freeze until someone claps for you and cheers: “Bravo!”. Then you must bow gratefully and thank them for their applause before you are free. If we can get the US House of Representatives to play this before their sessions they’d get so much done!
– Submitted by Neil Ginsberg

Stick in the mud

I think everyone knows this one. If you’re tagged you’re stuck with legs wide apart. If another person crawls through your legs you’re free otherwise you stay stuck. If you’ve freed someone you can either hold hands and be in position to tag the tagger, or separate and stay in the game as individuals. The tagger’s task is to get everyone stuck.
– Submitted by Dinos Aristidou

My favourite tag game is “Bull dog”, I used to play it lots as a child and love to teach it to new students. The game starts with the whole group on one side of the room/space (the bigger the space the better). I stand in the middle of the room and become the “bull dog”. When I shout: “Bull dog!” the task for the group is to cross to the other side of the room/space without being tagged by the “bull dog”. If they do get tagged, they join the ranks as fellow “bull dogs”. And help to capture more of the group as the process repeats until everyone is a “bull dog”.
– Submitted by Sydney Smith

I have a collection of ridiculous animal hats from my travels. The ensemble leader places one hat on a random student who is “on”. If s/he tags another they are “stuck in the mud” until someone crawls between their legs. You cannot be tagged if you are hugging a partner. The chaos ensues by placing more and more silly hats on members of the ensemble until there are approximately 5-7 taggers, depending on the size of the group.
– Submitted by Moira Arthurs

One person is “it”. Once they tag another student, they too become attached either by holding hands or linking elbows and both have to be involved in the chase. Only the “it” person can tag. The game can continue with everyone becoming part of the blob and having to work together to get the group. A variation is once the group reaches eight people they then can divide into groups of four and continue the chase.
– Submitted by Catherine Rankin

In pairs. There is a sticky web between A and B and they are roughly 60 centimetres apart. A leads B through the space. C comes in and tries to steal the gaze. Once they have achieved this they move the “stolen” A or B and the now single one tries to interfere.
– Submitted by Joachim Matschoss

Pick two people from the group to play the tag game and label them A and B. Both A and B put their hand on their back so that their palm is facing outward. The aim is to tag the others palm with their other hand. At any point a mediator can call out: “Freeze”. The mediator asks the group: “Who are they? What is going on?” The group answers according to what they see. Encourage them to speak out whatever comes into their head e.g. a night club scene, a lover looking at a wedding etc. NOTE: theatre is made up of wants and desires i.e. I want what you want or I want something different. That is the aim of this game. With the rest of the group build a picture around the two in the middle e.g. it shows a disapproving uncle at the wedding. What are they saying? With other members of the group create a scene about what happened before e.g. in the bedroom. What is in the room? What happened? Illicit questions from the group to create even more scenes and design a piece of theatre.
– Submitted by Joachim Matschoss

Everyone sits in a big circle. One person is “it” and begins to walk around the circle, tapping each person on the shoulder. But instead of saying “duck” each time, s/he must name a different animal each time. Just as in regular “duck duck goose,” when “it” says “goose” the person tapped must chase him/her around the circle. If “it” can run around and sit where the “goose” was sitting, there is a new “it”. If the “goose” catches “it,” then s/he must stay “it”. All this is just as in regular “duck duck goose”. The difference is that both runners must run as whatever animal was mentioned just before “goose” e.g. if “it” had said: “Cow, pig, dinosaur, owl, slug, goose”, you’d see two slugs slowly chasing each other around the circle. Anyone hesitating while naming animals is out. Also, anyone not being the correct animal is out.
– Submitted by Cendrine Belleux