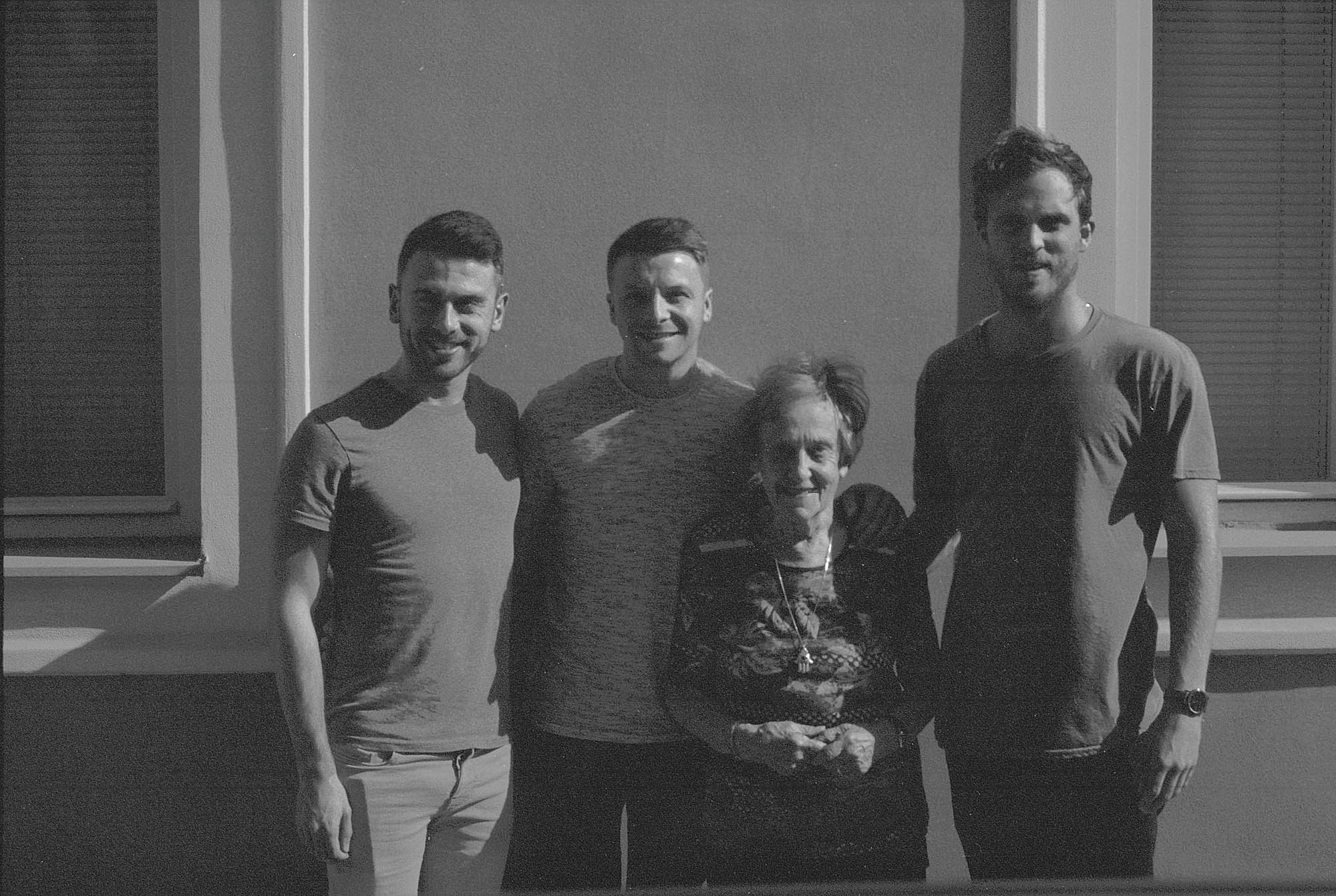 Every year we hold a festival in Terezin, a former Nazi concentration camp in German-occupied Czechoslovakia, and everyone who goes describes it as life-changing.

We wanted to capture part of Terezin’s story. So last year, Tom Scott and Logan Fraser went to Terezin with film maker Greg Dennis where they met 91 year-old Doris Grozdanovičová, who survived the Holocaust despite being held prisoner in Terezín.

This is her powerful and moving story. It’s a ten minute film so set aside some time so you can watch it properly. It’s worth it. And we’d love it if you’d like to share it as we think this story should be heard by as many people as possible. Beneath the video, you’ll find Tom, Logan and Greg’s account of making the film, and what it means to them.

Three currencies in five days… the making of our Terezin film

At 9:00pm on an overcast Cornish evening in July the journey to the Czech Republic and Poland began.

For the first leg of the journey we had a three hour drive to Bristol, arriving at midnight to collect a camera gimbal (a handheld camera stabiliser). We loitered uncomfortably outside the locked car park of an apartment block, but were soon on our way again, powering down the M4 towards London.

At 4:00am we headed into an eerily quiet London Heathrow airport. I might write a book one day: ‘Airports at Night’ – they are truly fascinating places in the cold hours of the very early morning. We had three hours to wait until check in so found some benches and, after being told off for trying to move them into a bit of a bench community, tried to get some sleep. It wasn’t happening though – we were too aware that we had thousands of pounds worth of camera equipment with us, which needed guarding.

Check in was uneventful and followed by a much needed breakfast in the Heathrow Terminal 3 lounge (thanks American Express). Then finally we were properly on our way. We landed in Czech Republic around lunchtime. After picking up the car we drove the scenic way to Terezin along some beautiful, long and winding roads.

Once we arrived in Terezin we had some lunch with Petr, who runs the Park Hotel (former SS headquarters) and set about scouting out suitable filming locations. Each year, ISTA holds a high school festival in Terezin. In early 2017 I helped run the event but this time I was here to create our film.

Terezin is a former military fortress built in 1780 by Joseph II and named Theresienstadt (Terezin) after his mother Empress Maria Theresa. It was subsequently occupied by Nazi Germany in World War II and used as a concentration camp for Jews from Europe.

Terezin is a surreal place… to imagine what happened there can at times be really hard. People still live there and on the face of it it’s a typical Czech community. Only when you delve deeper and explore the history of the place do you see the stark and palpable reminders of the terror that occurred there.

That evening, after a very long and productive day, we headed to Litomerice (a nearby town) for dinner and a bottle of Pilsner Urquell – a must when visiting the Czech Republic.

The next morning was filming day which also meant the arrival of Doris Grozdanovičová. Doris is a survivor of Terezin, having been kept there by the Nazis for four years. She is a remarkable lady: funny, resilient and beautiful on the outside and in. She has worked with ISTA before and it was just wonderful to see her again.

We had a busy schedule so got to work quickly, interviewing Doris for nearly two hours and then walking around the former camp with her doing some pieces to camera. Her insights are amazing and her stories both incredible and inspiring.

We finally stopped for dinner at the Pizzeria, a favourite with ISTA artists and then Doris headed back to her home in Prague.

It was an emotional day for us all. We have developed a wonderful relationship with Doris and I hope it isn’t too long before we can see her again. Tom speaks with her every now and again on the telephone – at first she often mistakes him for her son who lives in London!

The next day we did more filming in Terezin, specifically at the Krematorium. We are hugely grateful to the Terezin Memorial for granting us unlimited access to film. It should be expressed that filming in these locations had quite the emotional impact on us all – indeed there were areas where for many reasons we felt it more respectful not to film.

Day three meant it was time to head to Poland. A long, but beautiful five hour drive took us across southern Germany and through three different currencies – paying for the toilet became a mission in itself.

Many toilet breaks later we arrived into the small town of Katowice in the early afternoon and we immediately headed to Oswiecim, which is home of Auschwitz I and Auschwitz II-Birkenau. These are probably the most well known of the Nazi concentration and death camps and were responsible for the deaths of over 1.1 million people between 1942 and 1944. Again we must thank the Auschwitz National Memorial for granting us unlimited film rights to every aspect of the camps. While there is much we didn’t feel comfortable filming, it was a honour to be trusted with recording this most horrific of places. It is so important that we preserve and share this history.

We didn’t have long on the afternoon of day three so we soon headed back to the hotel for some much needed sustenance. We very much regret the amount of food we consumed. The next morning myself and Greg were still full but Logan seemed ready to go again and had a rather hearty breakfast.

At 5:00am on day four we headed back to Auschwitz II-Birkenau to meet our guide Peter. We were extremely humbled that they opened the gates for us at 5:30am, two hours before the first tourists would arrive. The air was damp, cold and somehow heavy. To be there at dawn, alone, was a very profound experience and one we won’t soon forget. It’s hard to describe, but the absence was remarkable – to be such a small group, alone in a place where so many people died is a feeling words cannot describe. I hope the film gives you some sense of what it was like.

Peter was just brilliant, his knowledge is vast and he delivered it so eloquently and with such respect. I hope we do him justice in our film.

After another long day and then a night of editing it was time for the drive back to Prague. We had a few hours spare before heading to the airport so had a wander up to awe inspiring Prague Castle (which was also the former Nazi headquarters of Reinhard Heydrich).

It wasn’t quite as smooth going back, with delays and a rather large thunderstorm but we made it safely to Heathrow. We then jumped in the car and headed back to Bristol for another midnight rendezvous to return the gimbal, eventually arriving back in Cornwall at 3am.

Creating this film was an amazing yet tiring experience, both physically and emotionally, which has undoubtedly changed our lives for the better. We left this trip with a sense of awe and responsibility to make this film the best it could be, not only for Doris and her story, but for the millions of people who lost their lives during the Holocaust. It has been a greatest honour to have had this opportunity and to share Doris’s inspiring story with you all.