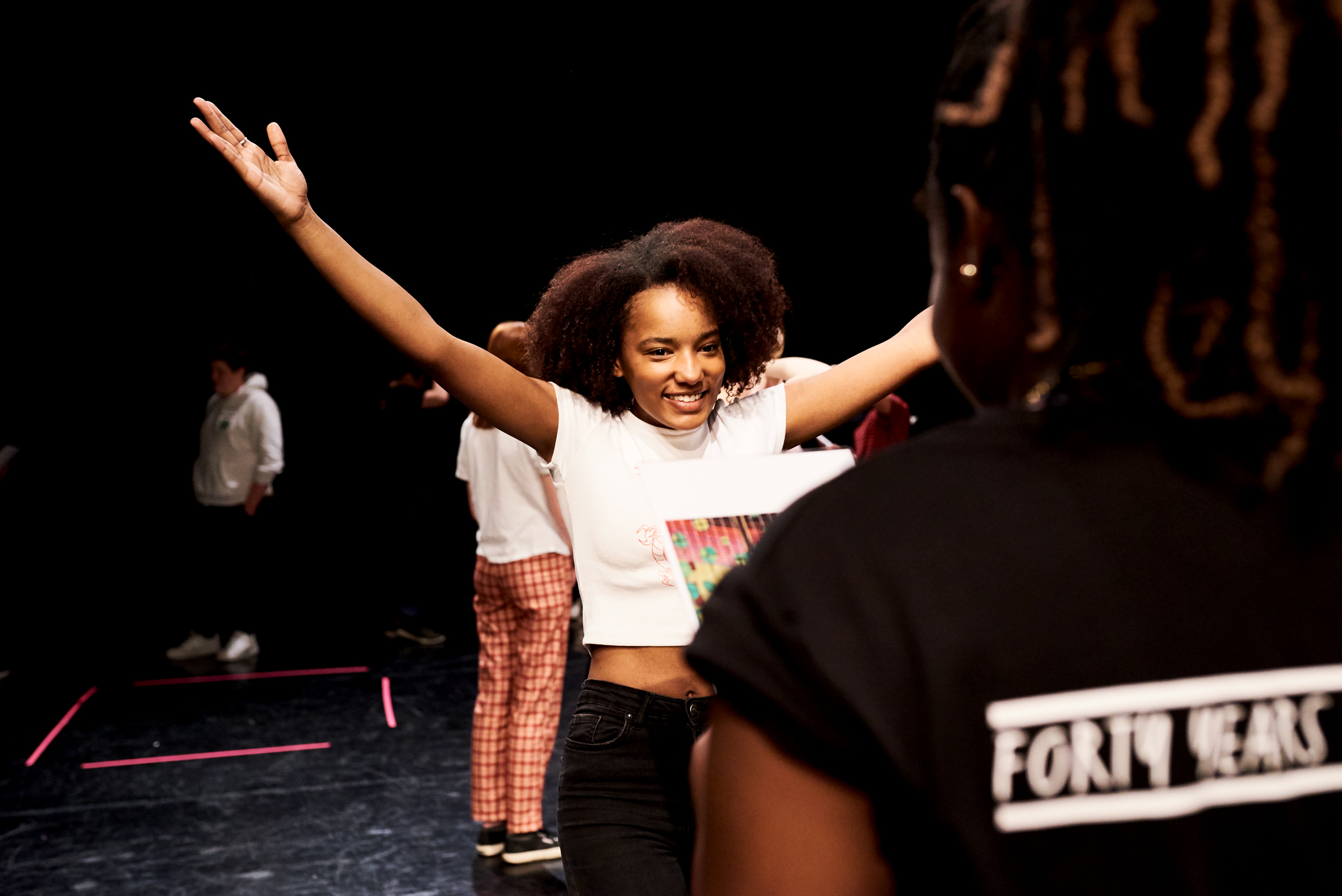 What is the project?

Hear It Out – A memoir of an extraordinary year is a unique opportunity for students to be part of a global digital production. Over 60 young people from international schools worldwide will create a piece of theatre reflecting on their experiences of 2020. This work will culminate in an international digital performance which will be pre-recorded but presented with a live screening in September 2021. Alongside the production, from June 2021, we will also be posting solo performances of individual stories performed by students from the different schools involved.

Unlike our virtual festival model, the international digital Verbatim theatre production project enables young people to collaborate with peers around the world. Hear It Out – A memoir of an extraordinary year will become a key body of work within the international community using the experiences of young people throughout 2020, celebrating real life stories, creating a significant piece of oral history. Interest in this project will be generated beyond the international school community and as it will capture this remarkable moment in time it will afford a significant profile for those schools taking part.

By performing other people’s stories, from different parts of the world, this project develops student’s ability to listen deeply, empathise and connect with other young people around the world.

How did the idea come about?
Conceived by ISTA honorary life member Dinos Aristidou and transformed into an ISTA experience by Dinos and Sally, this project is something we are just a little bit excited about! Never before in our 40 year history, have we embarked upon or produced such a project. And it’s testament to the positive, creative and innovative way in which we have responded to Covid-19. Having said that, the international digital theatre production project will be rolled out as an annual offer on the ISTA event calendar – whether we can resume meeting face to face or not.

Dinos has developed the Hear Us Out Verbatim technique. Developed over a two year period, while working for New Writing South (UK) where real life stories from LGBTQ+ people were developed, recorded and performed. Initially designed as part of a Verbatim older people’s theatre festival Dinos and his team re-imagined the project due to Covid-19.

You can watch the Verbatim performance written and directed by Dinos here. The digital production lasts just over an hour so do set time aside to watch this as it’ll give you a really good idea of what the ISTA production will look like.

Dinos then proposed this idea to Sally who jumped on it. Dinos and Sally have been working for several months now transforming the idea into the most incredible opportunity and experience for ISTA schools.

Listen to Dinos and Sally discuss the project here. 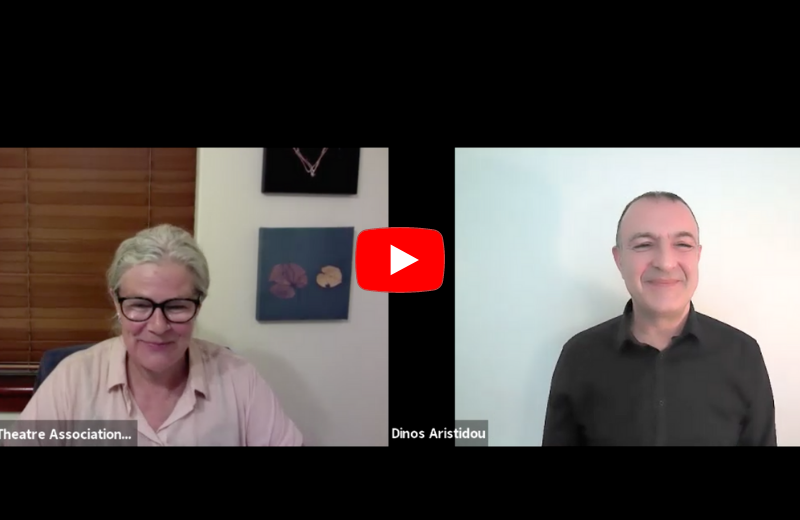 What are the nuts and bolts you need to know about?
The project will run from January through to May 2021. We are inviting 10 member schools to take part (first come first served) and we’ll be trying to manage schools so we have a spread of members from Asia Pacific, Africa, Europe, the Middle East and across to the Americas.

The project is aimed at high school students aged from 15-18.

Each school will be asked to register 6 theatre students. We are also asking schools to register 1 x film student and 1 x music student. These students may be part of your group of 6 or they may be additional.

We would like to receive expressions of interest by 18th December 2020 and you can do this by sending Sally an email on sally@ista.co.uk.

How will the project work?
There will be a number of workshops for a) teachers and b) teachers and students at various times during the project. Dates are listed below and we will expect all confirmed schools to be available for the workshops on the days set. For the teacher workshops we’ll run one session only and try as best we can to accommodate world time zones. For the student workshops we’ll run 2 sessions and make sure timings are regionally sensitive.

In between the workshops there are creation, development and rehearsal stages where schools will work independently to produce the material requested. Dates are clearly set for submission of material and more information on the guidelines for this will be sent to all confirmed schools in early January 2020. 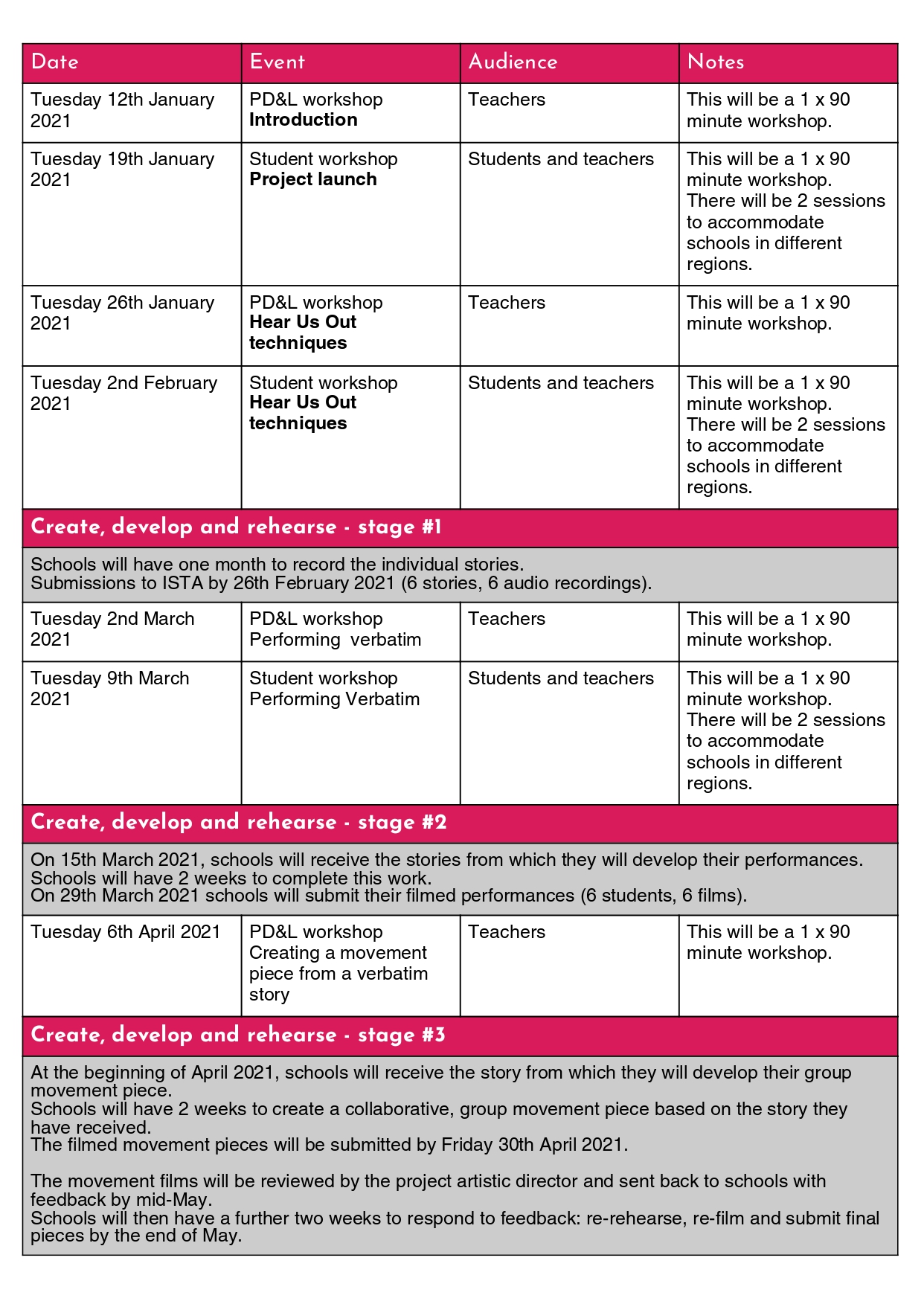 To be scheduled:
• All schools will receive a guidance film to assist with the filming of the individual stories and the group movement piece. A film workshop will be offered to film students in early March 2021.
• There will be a series of music/composition workshops led by our music director at various stages of the process. This music will underscore the individual performances as well as the group movement piece.
• Individual stories not included in the final production will be streamed monthly from June 2021.
• The live streaming of the production will take place at the end of September.

How much will the project cost?
We will be charging each school GBP £800 for the entire experience.