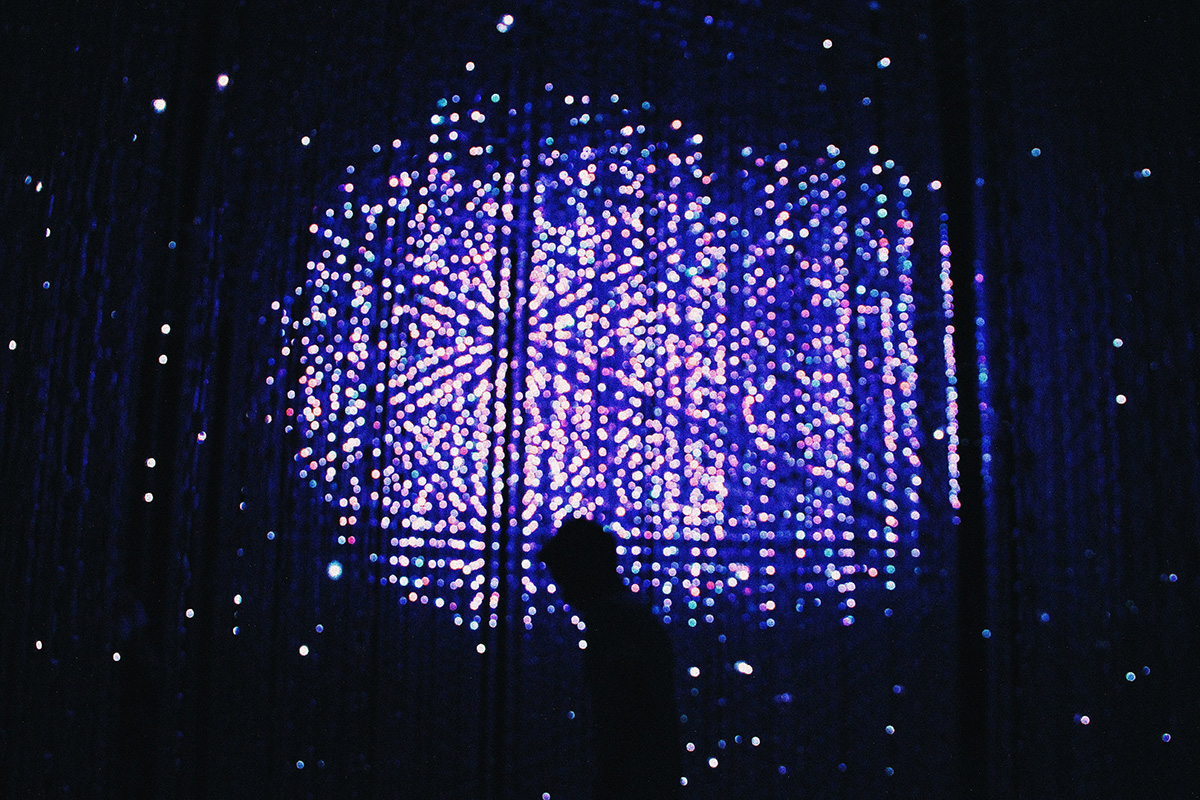 Trying to analyse and pull apart the many processes that combine when you create a production and explain these with any coherence is, I’m finding, almost impossible. Hopefully I will be able to offer an insight into how I (“we” – there’s always a “we”) draw inspiration, shape and implement some of the more technical elements of productions.

Important note #1. It should be said that all of the work discussed has been created without the skills of a theatre manager, technician or production class. Everything here has been explored, created and implemented using a small team of interested students in their own time. I love that.

Important note #2. As a department we tend to choose productions that will challenge and develop our students. Techniques and conventions that they can apply in their own projects. I think this means our material is relevant and exciting, and that students can draw direct inspiration from first-hand experience.

We live in a world increasingly surrounded by technology. Whether it’s necessary or not it is part of our lives: helping and hindering, attracting and distracting. Representing the ubiquity of this technology on stage is a challenge and also unavoidable if the story’s central conflict revolves around it. This was exactly the situation we were presented with when we decided to stage Evan Placey’s play Girls Like That.

Placey’s work is a fascinating account of one girl’s trauma when her naked photo is circulated around her school via social media.

Will the other girls, who Scarlett has known since she was in reception class, throw a protective ring around her? Not likely. They are too busy bitching about her body, comparing the size of their own breasts against hers… When a naked picture of the boy everyone fancies also starts circulating, the reactions… are very different. Because a boy who sleeps around is a stud, and girls like Scarlett are sluts. They’re not girls like us.

It’s a very challenging piece of theatre and not only in content. The script itself is also mostly written without character delineation. Thanks to the Scene issue on provocative theatre (January 2016) we were able to approach this text in a carefully considered manner with full parental and school administration support.

The essence of the play necessitates representation of the pervasiveness of personal devices among teenagers. So one of the first discussions we had as a production team was how this could be portrayed to best effect. How can we share small handheld screens and the conversations they contain with an audience? Where would the phones come from? We certainly couldn’t afford to buy them and personal phones lacked the control needed. We could have gone down a completely symbolic route relying on physicality and gestures but felt strongly that the actual devices needed to be present: a physical reminder protruding from a back pocket, hand held, present for that casual distraction. The second question was how we could use the devices in a manner that went beyond the necessities of the plot to open up further storytelling possibilities, adding a sense of depth and complexity.

Television and film, along with live theatre, can often provide inspiration. I remember watching the BBC series Sherlock using clever visuals to represent the workings of the lead character’s mind as well as crisply integrated text messaging showing strings of important conversation and thinking: how do we do that live? Is it possible? Projections? Video projection in performance has long been a source of personal interest. I think it was at a 2007 London TaPS when I saw Complicite’s A Disappearing Number at the Barbican where moving projections were layered over the performers themselves. It was this show that demonstrated to me the power of projections and their ability to elevate a performance. I was fascinated with their dynamic nature and was determined to discover ways in which I could effectively use projection in a similar way without expensive equipment. And War Horse… what a wonderful example of simplicity in projection, a torn page running the length of the National Theatre’s Olivier stage reflecting both the journalistic narrative and the historical context as the live story unfolded beneath it.

Another break-through came along with the help of ISTA. Not long into our rehearsal process we were scheduled to host an ISTA middle school festival. I thought this the perfect opportunity to experiment with ways of integrating technology in performance work. As a modern city Singapore has embraced all sorts of technological change and innovation. We named our festival Digital Footprints and its aim was to bring digital technology and the urban landscape together in performance. City life, culture, history and tech working in partnership to tell interesting stories and to explore the city’s rich landscape. An exciting element of this festival was providing each participant with an iPad to be used during the event. This was made possible through our school’s 1:1 device programme. The iPads are owned by the school and I was able to borrow enough on a short term scheme. I was hoping that the ISTA artists would experiment with ways that these could be integrated in performance work – ways that I would never think of. Fingers crossed. They didn’t let me down. The creative outcomes were amazing and included visually spectacular work such as:

– The recreation of the Singapore River’s flow and movement as the full group held aloft 70+ iPad screens, swaying, bobbing and shifting their bodies: a river of sparkling light.

– An eerie ensemble group entrance using iPads as masks, faces became all eyes staring out at the audience.

Having larger screens than phones, the iPads could be clearly seen by the audience and this opened up all sorts of possibilities. An idea to incorporate live projection using Apple TV was abandoned as the wireless connection proved to be too unstable.

Seeing the successful use of these devices gave our team the confidence to make artistic decisions that would rely on iPads in our own production. A lot of experimentation generated an amazing amount of ideas from which we selected the best and most effective. Each cast member had a dedicated iPad loaded with specific content for their parts in the story which included:

– A powerful opening scene presented in an ultra-violet light tableau. Instead of speaking the offensive insults (slut, ho-bag, prossie, slag) the iPads were used as glowing word scrollable placards.

– A reminisce about events in the girls’ childhoods presented through “Instagram” images using a six iPad mosaic. The performers were able to scroll through a range of images which made up their part of the mosaic, together creating a large and easily viewable photograph. This mosaic also transformed into the class’ bespectacled, heavily made-up history teacher ”droning on”, GIF eyes blinking.

– Being able to present the naked photograph to the audience through another mosaic of ten plus screens that focused only on specific body parts. The performers were able to stare transfixed at their own screen before turning it towards the audience and creating a much larger image.

– Two large homemade rear projection screens in the shape of text boxes, hung stage left and right. These were used to display texts, tweets and images (all premade movies) as well as stream live feeds from strategically placed video cameras and transform into digital placards detailing locations and commentary on the action.

– Characters reacting in the moment to the story’s events by holding up iPad size emojis and likes, and then be able to “send” them with a flick of their hand.

It might sound complex – and in some ways it was – but the students were used to handling their phones every day and had no issues with the iPads. The use of technology found stark contrast with very simple staging. A number of small black boxes were used to create all the different locations needed by play: from seats in school, to lockers, to McDonalds, to swimming pool changing rooms. This idea was directly inspired by A Curious Incident of the Dog in the Night-time. Handy hinged-lids provided the performers with personal lockers for storing their iPads, props and costume needs right on stage, removing the need to exit and speeding up transitions. The boxes with easy to slide, manoeuvre, carry and stack.

Girls Like That was a piece of theatre that really did push students and staff in new and challenging directions. But that’s the point, isn’t it? It is only through taking risks, stretching ourselves and our experiences – and failing too – that we can grow and gain new skills, learn and communicate with more effect. What’s the point in re-creating the same show year after year using a different script?