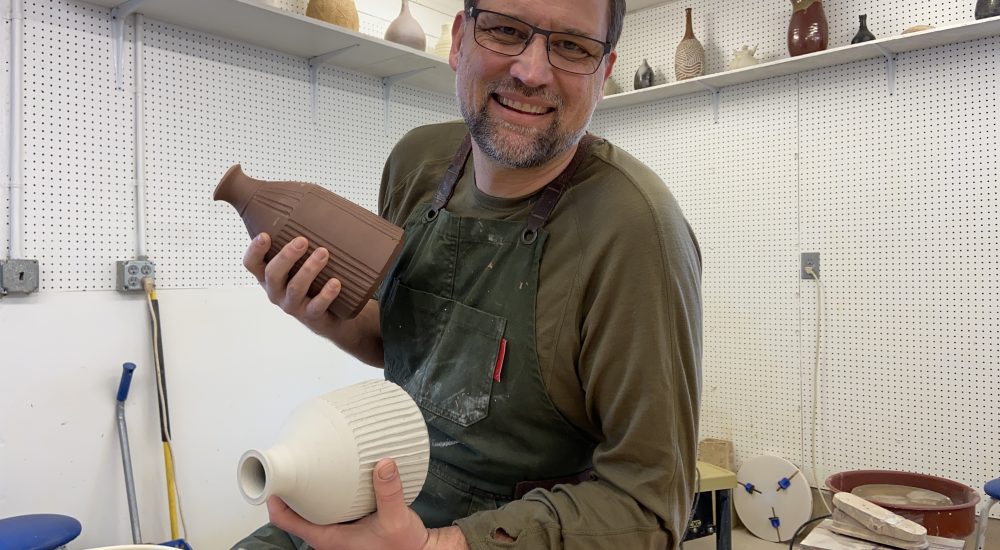 Tossing in his day job promoting the arts and returning to actually making art.

Hands covered in drying clay, Mike sits with a potter’s wheel spinning quietly between his legs reflecting on a big decision he made a few months back — to walk away from a full-time job with benefits that he’d held for more than half a decade to do… what? Throw pots and write screenplays? Actually, it sounds brilliant to me — to most people, I’d wager.

Quit your job, leave behind that flickering computer screen to pursue the heart’s most creative desires? It’s the stuff of movies.

I’ve come up to the Grunewald Guild’s Pottery Studio in Plain [Washington, USA] to learn a bit more about how this recent leap into unemployment is sitting with him. Plus, he’s promised to show me how to throw my first pot.

Getting into the buff
Mike lofts a blob of clay called Vashon Buff into the air and catches it, sensing its weight, pressing it into and out of new shapes, working it. Mike’s a big guy at six-foot-six, so when he throws the clay down onto the pottery wheel it flattens with real force. He dips each hand into a bowl of water, presses a foot pedal to set the wheel in motion and then cups the mound as if he’s protecting it from the wind. I see the clay begin to alternately flatten and grow tall according to the pressures he applies.